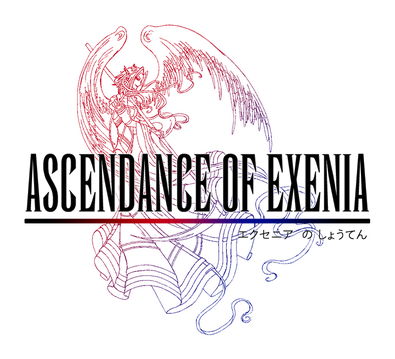 All About Exenia, The Best VRMMO Ever Made!

Asecendence of Exenia is a virtual reality massively multiplayer online roleplaying-game (or just a VRMMO) released in 20XX-12 and published by the Prisma Group. One of the first computer games to make full use of the then-new full immersion virtual reality technology, Exenia was released to widespread critical acclaim and commercial success. At the peak of its popularity in 20XX-8 Prisma regularly reported 10 million concurrent players worldwide, with the highest concentrations being in China, Hong Kong and the United States. Funnily enough, it was something of a failure in native Japan, where most gamers were either still focused on console gaming (specifically the Grand Drive Online MMO also by Prisma for the GS-XI) or more heavily focused on cyberspace games and sports.

Set in the titular mysterious, ethereal realm of Exenia, Ascendence of Exenia is an exploration-based science fantasy narrative that combines elements of dark fantasy (such as kingdoms, castles, monstrous creatures and knights), science fiction (warp technology, fully-sentient androids, psychic powers) and even light parts of our everyday lives (cybernetics, cyberspace, computer usage, and massive corporations as a plot point). On release and even today it was noted for its dark, gothic-inspired aesthetic, dreary atmosphere and unnervingly realistic violence (so realistic that a gore filter had to be added in an early patch!), as well as dark themes such as existential despair, personal trauma, the horrors of war and individual agency. Gameplay is done in real-time with an emphasis on active motion; most inputs are performed through simple thought by the electrode transmitters inside the VR helmet allowing players to move, speak, act and even feel as if they were really in the world! Certain actions such as inventory management, menu navigation, sending and receiving messages and backup controls are performed with the use of a controller or keyboard, though most players use a two-in-one gamepad/keyboard combination for maximum versatility.

As an avid player of Exenia for almost a decade straight (proudly representing the Nekaiyo since 20XX-10 and counting!) I can earnestly say that there isn't anything quite like Exenia, even in the wake of other VRMMOs being released (even by Prisma!). Even as the expansions have been discontinued and the playerbase continues to dwindle, Exenia's spirit remains strong as ever. The lush environments and stunning use of the full-immersion technology are still unparalleled, the community is the best you'll ever find even in its small state, and the way that the mystery of Exenia is woven together over eight expansion packs and downloadable questlines still holds its ground against more conventional VRMMO narratives. While my personal favorite is the Call of the Tides expansion, I firmly believe there's a little something in this game for everybody... even if it's just a few friends to make! :-]