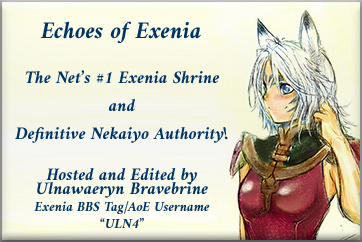 The Ancient Story of the Nekaiyo, As Passed Down Through Millenia........

The Nekaiyo are said to have been the defenders of the oceans of Exenia since time immemorial, having dwelled upon the seafloors long before the Humes ever made their way to the mainland or established the Twilight Empire. While it is not clear how or why the Nekaiyo came to the seas themselves or why they were bestowed this duty by Exenia herself, I am confident that the great Denny Shinohara-san has something BRILLIANT just waiting to be found!!!

The Nekaiyo are defined by their long and storied battles against the Wavebeasts, including their archnemesis the Wavebeast Prime - the final boss of the Call of the Tides expansion! The Wavebeasts are born of Exenia's despair, coming from the very deepest roots of her soul (the bottom of Exenia's oceans!) and aiming to take down everything in Exenia from the oceans themselves, ranging from attacking swimmers to causing great tsunamis... but the Nekaiyo act as Exenia's first line of defense, keeping the Wavebeasts at bay and fighting them off whereever they may strike. Many of the in-game NPCs tell stories of Wavebeasts fought in years past, and of great Nekaiyo warriors such as Merus the Beastkiller - who was once thought long dead, but makes his triumphant return just in time for the battle against the Wavebeast Prime. According to certain quests in the Chinese exclusive content for the Nekaiyo questline, many Nekaiyo warriors were forced to give their lives during battle to unleash all of their Tension and Catharsis at once to defeat a Wavebeast... though I personally dislike this interpretation, as it posits the Nekaiyo as much more brutal and uncaring towards their own kind than all other material have painted them to be. :-(